Getting dirty... Snow, Mud and Mtns... Yeah baby..That's the Ticket

"If you think you don't need a helmet, you probably don't." ~ Unknown
Got an opprotunity to take the bike out this week. Once after work for a late evening ride, and today, where we went to the mountains to get some back country training. 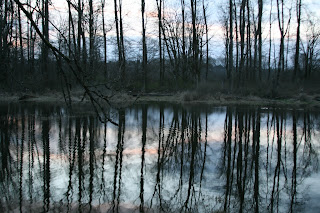 This series of reflection pictures were taken about 7:00 p.m. on one of the tributaries of the Snohomish river. Notice the daylight... It's staying light out longer now... Whoo hooooo! 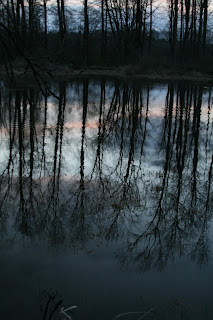 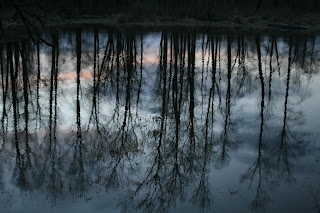 I dunno, but I think the refection looks better than the actual trees. The refracted light gets filtered, resulting in a more crisp image that brings out the colors. 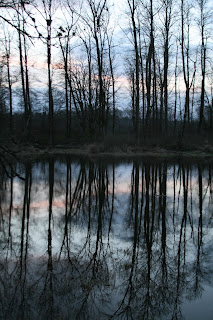 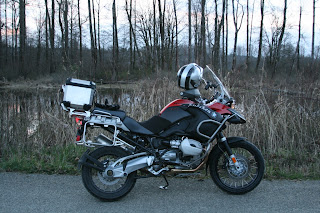 My bike was parked up from the river by a farm. Some horses were coming by to check it out and got spooked when I came up from the bank. Good thing too that they ran away. Last thing I need to find on my seat is some bite marks from a horse.. else they may find their way to a glue factory or a doggie food processing plant :-) 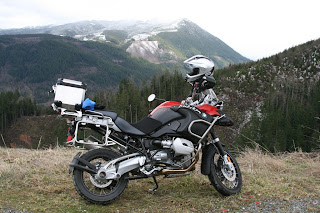 Today, I took the bike out towards the undeveloped roads around Mt Rainier Park. This is the road up to Mowich lake. There was a new dusting of snow at the lower elevations. Very pretty. 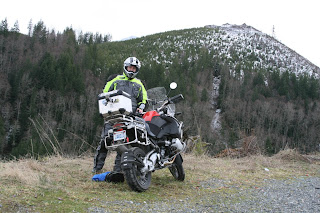 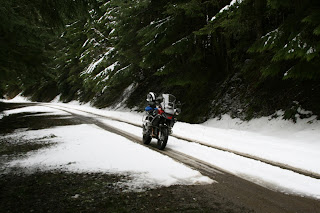 I knew the park entrance would be closed... it usually is until late May, however, I was hoping to get to the gate. 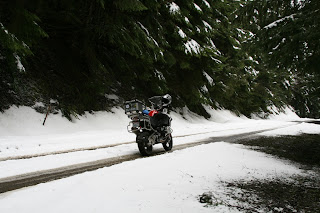 As you can see, I only made it about 1/2 way when I encountered some snow. It started out innocent enough, but kept getting thicker as I went up in elevation. 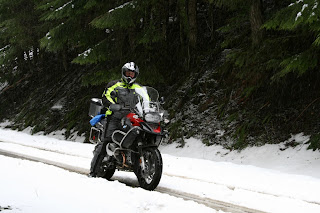 I stopped to setup my tripod to take a picture of myself and it began snowing pretty good.  If you look closely you can see the snowflakes (select pic for larger image). 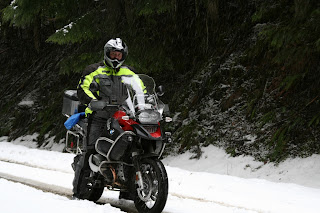 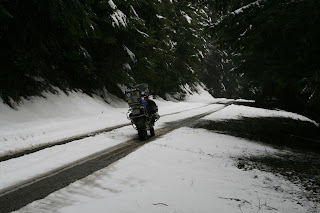 I road a bit further than this picture shows. It got deep and I got caught in a very deep rut... a trench really. I had one heck of a time turning this big ox of a bike around. I got off it and gave her some throttle while I tried to pushing it forward.... No luck, the big girl kept sinking in the snow. I eventually let it roll backwards and then used the momentum to turn it across the tracks. Even then, it got stuck pretty good. I had to talk nice to the girl and coax her back and forth to widen the track and turn her around. 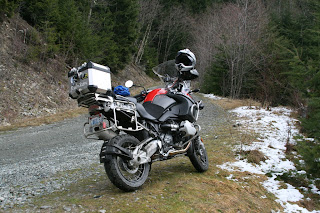 Thankfully, I didn't drop the bike. We took a breather as we came back down. 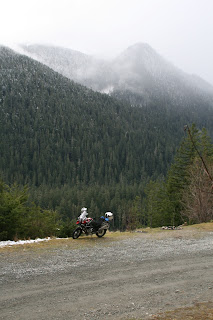 It was gorgeous, but, as you can see in the picture, the snow was coming back towards me and I didn't want to get caught in it again. 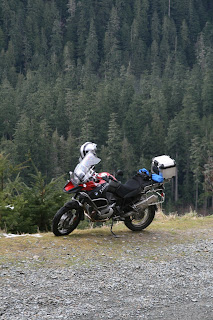 As it was, I had to ride through some slushy stuff on the road and when I hit the asphalt coming back out of the park it got very, very slippery. Have you ever tried ice skating with one of these big girls... its not fun... especially when she has the weight advantage on you. 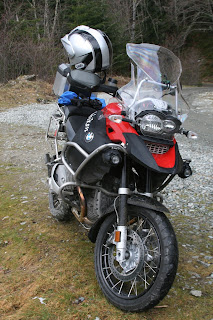 All-in-all, it was a great experience. I will get some more time in the dirt with the bike as spring begins to take hold and the roads dry out a bit. A good set of off-road tires wouldn't hurt either.
I got home at 6:00 p.m. Not a bad way to spend you day off.  I now have 9,000 miles on the bike in less than a year of ownership. Time for a new oil change.
Until Next Time....
Posted by GrizzLee at 8:36 PM No comments:

"Three-fourths of the Earth's surface is water, and one-fourth is land. It is quite clear that the good Lord intended us to spend triple the amount of time fishing (or paddling [GrizzLee]) as taking care of the lawn". ~Chuck Clark
This past weekend marked the first days of spring. Having a bit of a break in the weather, my new found paddling friend, Don and I took to Snoqualmie river. We were intent on finishing out trip we had started 3 weeks or so earlier where we started in Fall City and paddled the Snoqualmie River to Duvall. The temperature was much more amenable this time around, hovering around 50 degrees as opposed to nearly freezing temperatures of 27-37 degrees on our last river outing.
As a paddle trip, I can highly recommend this section of the river. We started in Duvall on the Snoqualmie river and ended up in Everett on the Snohomish River. There are many tributaries along the way and a major river, the Skykomish, joined in the fun about a 3rd of the way into our paddle. We saw lots and lots of wildlife, including Bald Eagles, Hawkes, King Fishers, Coyotes, Herons, Ducks, Beavers, etc... The river flows well and makes for a good leisurly pace and is wild enough to make one feel they are experiencing a good bit of wilderness, despite being so close to a large surburban area. The river is big enough to accomodate our sea touring kayaks, whcih gives us speed and comfort. 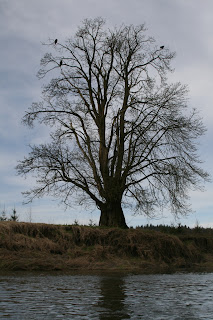 The Snoqualmie basin is a mecca for bird watchers.
The tree was full of young bald eagles. 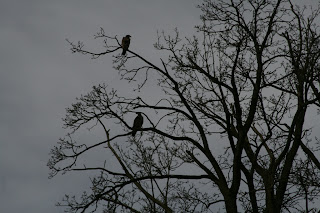 They are all peering down on us, as if we were prey. 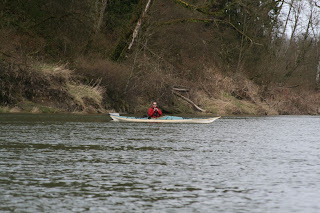 Don taking a picture of me taking his picture. 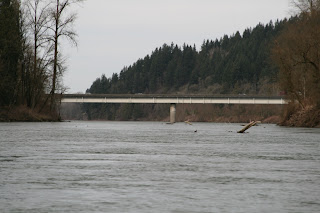 Hwy 522 bridge. The Skyhomish river joins the Snoqualmie river just behind me. It becomes the the Snohomish river. Something that I never realized until this day, was that that the Snohomish name is a mix of the Skyk-omish and the Sno-qualmie names joined together... just like the rivers do. 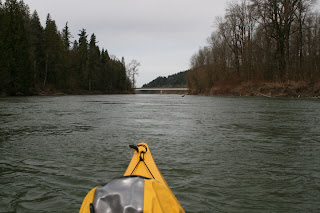 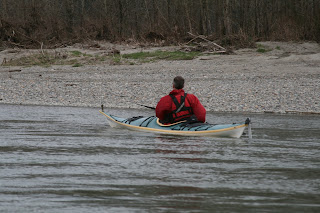 Looking for abeach to have a snack and stretch a bit 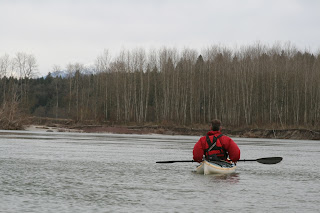 At this point, the river spilts into multiple arms. This makes it tough to find the main channel 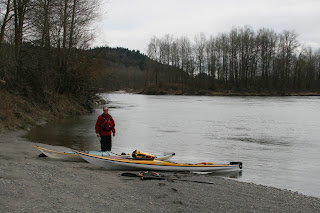 Awe... a much needed break. Just before this stop, we came across a couple of large beavers who seem to have made a home on the bank, underneath a road. 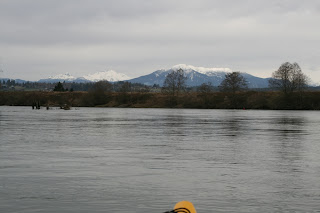 The Cascades mtns draped in a nice winter coat.. 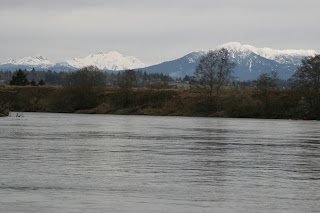 The mtns make for a beautiful backdrop. 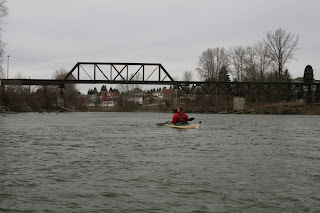 As we approach the town of south Snohomish we notice an old railroad trestle. 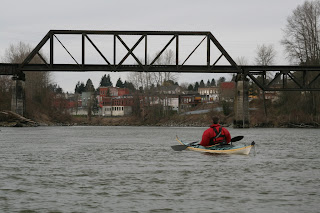 Look closely and one can see the roundhouse and the big gear that once opened, allowing for much larger boats to pass by. 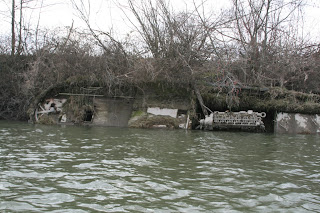 Speaking of boats.... we came across this boat half suken in the water. Look at the size of that engine!! 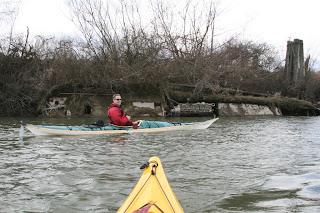 All-in-all we paddled nearly 24 miles... a great distance of  paddling by any standards. When we began, we were nearly 300 feet above sea level. The last five miles were beginning to take it's toll on us. We were at sea level and the the tide was coming in. To top it off, a pretty good head wind had developed. We were very happy, to finally to exit at Rotary park near downtown Everett, in a little riverside town called Lowell.
A big thanks to Lori for picking us up and arranging the transportation.
Until next time.....
Posted by GrizzLee at 7:56 PM No comments: