Part 4: Tales and Trails of The Chilcotin, Bella Coola and Beyond

I was still reeling over the ride up to Blue Jay Lake and the incredible vistas I witnessed. However, I had one item on my agenda for the day.

But first, I wanted to check into the Cumbrian Inn and put my gear away. The owner wasn’t ready for me, nor would he let me leave any gear there. I must say, I have a hard time recommending this place and will not go there again. Had I known how fantastic the weather was to be, I would’ve camped. As it was I couldn’t cancel my reservations at the Cumbrian. The Bella Coola Inn is the way to go. Not only are they friendly and accommodating, they have the best restaurant in town.

I wanted to go see the ancient petroglyphs I have heard soo much about. So I talked with a couple of locals who gave me instructions on how to get there. Not really that hard to find actually, but there are no signs. I was later to find out that the Canadian Govt has now declared the area a perk but has yet to allocate funds to do anything with it. I found my way out of town looking for Thorsen Creek. I arrived and there was agate across the road and 2 gentlemen standing there gabbing. I was a bit nervous about leaving my back and all the gear left alone here. I decided to have a snack and one thing lead to another and it turns out that the gentlemen recognized me from my previous videos posted about my excursions into Bella Coola. I should say, they recognized my bike. One of them was from Alberta and told me he had just watched it prior to his trip out this way.

In any event, the other gentleman was named Bryan and is an elder that lives in Bella Coola. He stated that he’d give me a personal tour of the petroglyphs after dinner. So off I went back to town to have dinner and such. Afterwards Bryan drove me out there and we hiked up the road to the ‘glyphs. Turns out Bryan has been studying them for over 35 years. He told me an incredible story on how they were found and the  linkage to New Zealand and the South Pacific. He gave me his own interpretations based upon his years of research which included travel to New Zealand to meet with the gov’t and historical folks there to validate the theories. There is no denying it, there are many similarities, if not exacting stories at both places. It is even theorized that the natives from this part of the world dispensed out into the south pacific and so on. The unfortunate thing is that the local people have no real knowledge of where the carving came from. At beast it is speculated that they are 4000 years old and maybe date back as far as 10000 years. Due to the spread of Chicken Pox with the arrival of the white man, it is speculated that most of the elders who would have known more about these glyphs died too soon to pass on their knowledge. They weren’t discovered until the 1930’s when logging cuts made their way up the creek. The petroglyphs consist of images from the animal and supernatural worlds and Bryan gave me a fantastic tour. I wish I had more time, we hiked out in the dark. I didn’t take any pictures, but rather opted to have my camera running to record as much dialog as I could. Some of this appears in my final video production.
One of the stories that the petroglyphs told was how a person is born, lives their life trying to find balance. As the story unfolds one comes to find out that you, yourself, are responsible for the balance in your life. The lesson being that you can unbalance yourself if you want to and it all has to do with you and nobody else. Sounded like a parent telling a child, but there it was all in stone.

We hiked out in the dark about 10 pm that night and I arrived at the Bella Coola Inn to retrieve my gear they had stored for me. The folks at the Bella Coola Inn were getting very worried about me when I came back to get my gear.  They knew I was heading up toward Blue Jay and my late return was causing them some concern… so much so, they were getting ready to inform the RCMP. Great people there. I eventually got settled in at the Cumbrian Inn. After a shower and such I fell asleep with all the thoughts of the day dancing around in my head. It was one of the best days of my life.

The next morning I headed out of the Bella Coola Valley with both Tatlayoko Lake and possibly Chilko Lake as destinations. Like most trips of this sort, I’ve learned that you should never plan to be at an exact spot at any given time. Instead, I let my mood and wanderlust be my guide. 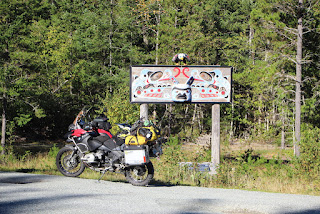 I slowly left the Bella Coola Valley. I contemplated going to Odegaard Falls (one of British Columbia’s tallest waterfalls) but decided that there wouldn’t be enough time as it was quite a ways down a dirt road. Instead I took a side road to explore a park area. It crossed the Bella Coola River and I stopped to see if there was any salmon in it. There was, but not as many as I expected. I was later told that the salmon runs where very low this year…

As I was heading out the valley I came across a really cool native art display in honor of one of their elders. 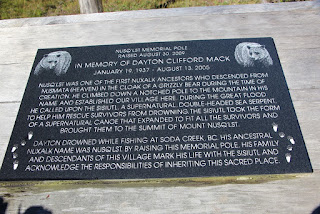 From there I continue my slow egress from the valley floor, stopping every so often to admire the natural setting and the glaciated peaks above me. I was completely engulfed by Tweedsmuir park before I began my ride up “Freedom Hill”.


As I got past Heckman pass the late morning light was shining brightly. There was not a cloud to be seen for miles and miles. Nothing but deep blue skies contrasted with the wonderful fall colors as I transitioned from the coastal region to the Chilcotin plateau. Words and pictures cannot describe my mood or the experience. Trust me, it was bliss. And if I died right then and then, I don’t think there would be a finer preview of heaven than this. 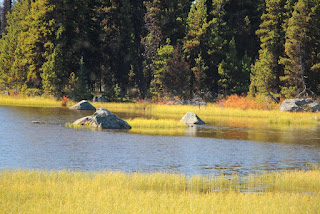 I stopped and got some gas and some “treats” at Nimpo Lake and had lunch outside of Tatla Lake. As i made my way beyond Nimpo Lake I made a stop at an old cabin by the roadside.  A cabin that I had surmised was a settlement home from long ago… maybe not, but it was my imagination at work. The setting of the cabin is dreamy. Out before it lies vast mountain meadows with views of the snowcapped coastal mountains in the distance. It wasn’t hard to imagine that someone made a life here running cattle. A very classic romantic western setting indeed. 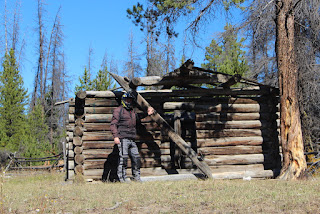 I was now in the Chilcotin Plateau country again. I was going to make may way to Tatlayoko Lake. Tatlayako Lake is a place I briefly kissed a few years back and always vowed to return armed with more time. This time around I got immersed in the lake’s immense beauty and got caught up in it all.

The name Tatlayoko is derived from the Tsilhqot'in language and means "lake of the big winds." But not today, the lake and the surrounding countryside were as quiet as a whisper.


I decided to ride as far as I dared to the south west end of the lake.  As I rode south I could see Potato mountain ( a big ridge that separates the this valley from the Chilko lake valley). The country is immense and immersive. Aside from the truck I seen on the road in from the community of Tatla Lake, I didn’t see another person. The recreation site at the northern end of the lake was empty and void of people. I made my way as far south as I dared.
The road was starting to deteriorate and I was getting tired. It was now evening and I am afraid that all my dawdling along the way has cost me miles of exploration. I saw a nice big black bear in the road but my Go Pro batteries were dead and by the time I stopped to get my camera out, the black beast had disappeared into the brush.


I eventually came to a fork in the road at the bottom of a long hill. The forest was really closing in on me at this point. As mentioned, the way was becoming more and more rough. I wasn’t really sure how much farther I could go on my big bike. I made the decision to turn around and make camp at an old logging mill site I saw several miles back. It was, in fact the Taltla Lake community park complete with picnic tables and even a ball field. No one was there. I set up my camp on the lake shore with dramatic views towards the southwest.


That evening… Not a sound nor a hint of wind. It was absolute quiet as I made dinner. I sat along the lake shore and bundled up, enjoying the last of the evening light with a cup of hot cocoa. The deep blues gave way to night, the birds, the bugs and the crickets started singing their last songs of the day. It was another incredible experience that my pictures and words fail to capture. However, the clear skies meant that the fall cold weather could once again bring the sting of the cold with it.


I drifted off to sleep and awoke sometime during the night not feeling well. In fact, I had a sore throat and was severely congested. However, I could see a bright light outside of my tent…as bright as a street light outside. I opened my tent flap to be greeted by a full moon glistening on the lake and starign directly at me.

I had to get up to take a pee anyway, so I got up and scampered about along the shore line. The moon light was reflecting off the lake and it was nearly bright enough to read by… but it was cold and frost was already forming on the stalks of grass and my tent was too soon follow. I felt as if I was getting the flu though and I decided that it was best to get back into my sleeping bag and warm up. In normal circumstances, I may have fired up the stove and made another cup of cocoa and enjoyed the moonlit night before turning back in.


And that was how ended this incredible day.

Stay tuned as next, I make some new friends and have another "Best Day".

oh and lest I forget... Here is a map of my journey during this leg. 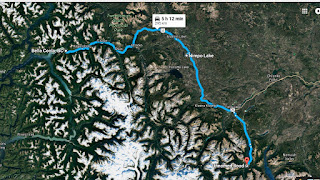 Posted by GrizzLee at 4:09 PM No comments: