Stewart, B.C. and Hyder, Ak, are the extent of the Nisga’a people’s territory. They hid out here to escape other natives such as the Haida and Tlingit natives.


Both Stewart and Hyder were developed as booming mining towns due to gold and silver deposits found here. Hyder is interesting in that it is the eastern most town in Alaska. Being in a temperate coastal rain forest, it rains a great deal in this area.  Would it rain on us, the weather forecast is iffy at best. However, we came a long way and we wanted to see the Salmon Glacier. The salmon glacier is one of hundreds that are found on the boundary mountains between British Columbia and Alaska. It is a scenic splendor, but only if the weather is willing to cooperate.


We packed up our gear and were able to leave much of it behind at the King Edward Hotel in a temporary storage room. Off we went.


We’ve been here before… 3 other times in fact, but not on motorcycles. We were surprised to tha the road through Hyder had been recently paved all the way out to the bear viewing platforms. The bear fish there when the salmon are running and the view platforms provide a safe means to view the bears in their natural habitat. There was no salmon running today and this no feeding bears to see. 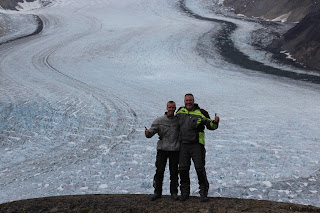 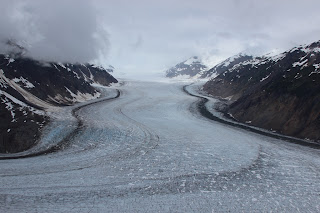 We proceed up past the mining areas to the top and back into Canada. From there the views became increasingly spectacular. We finally reached the summit and while there was not rain, it was somewhat socked in with clouds. However, we had time and were not in any hurry. Beyond the high point of the road we road about 5 miles further until it was closed.  The sun came out and the clouds burned off. SPECTACULAR. 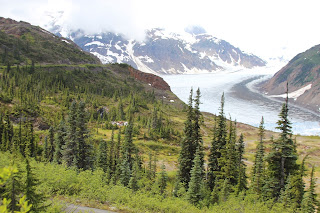 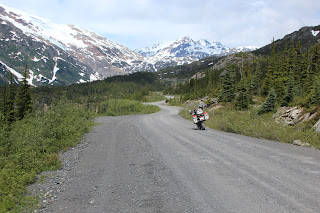 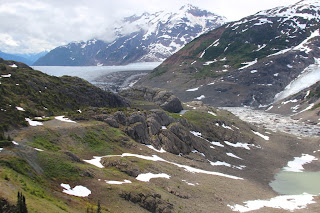 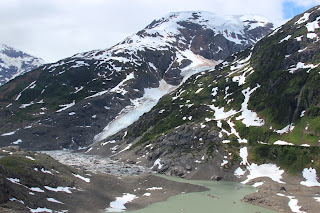 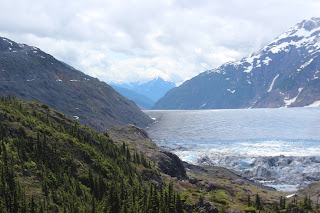 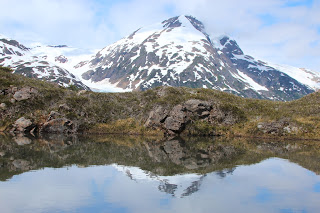 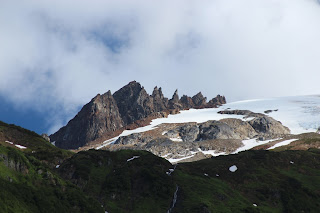 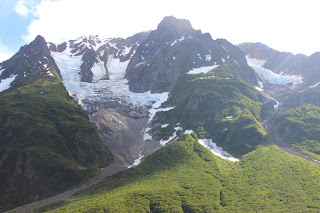 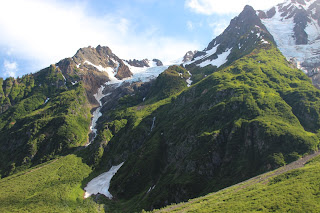 We leave Stewart and Hyder on a natural high. We return to the Cassiar hwy with no plan where to camp.  As evening draws near, we end up camping at Bell II Lodge, complete with showers and a hot tub. YES!!!

Thanks for riding with us.

Until next time...
Posted by GrizzLee at 9:10 PM No comments:

The day after in Houston was marvelous… Until the heat and humidity arrived… AGAIN!!


We had a nice breakfast in Smithers with a couple on a Can-Am trike whom wet met a couple of days before. 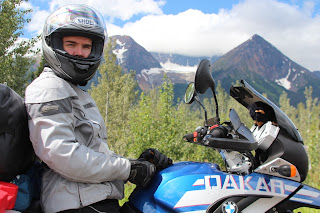 We went to New Hazleton and Moricetown to see if the natives were dip netting for Salmon yet. We arrived at Hwy 37, the Cassiar hwy. We took a few pictures and met a few more riders heading north. We also met a nice RCMP who highly recommended a good Mexican Restaurant in Terrace. He gave us directions. Since we were heading that way, it sounded good.

We arrive in Terrace a little bit early for dinner. So we gassed up the bikes and took off for the Nisga’a Lava beds. The park is about 60 miles north of Terrace and one heck of a beautiful ride through some glacier peaked mountains and inland fjords. Absolutely wonderful. 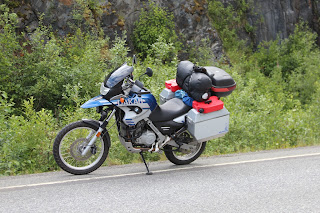 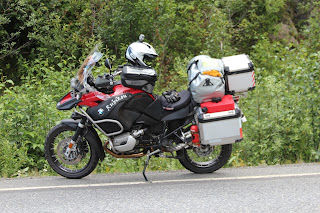 Stopped to admire many lakes, and waterfalls along the way. We ended up staying in the Nisga’a park campground.


The Tseax Cone situated in a valley above and east of the Tseax River was the source for an eruption during the 18th century that killed approximately 2,000 Nisga’a people from poisonous volcanic gases.
The real spelling/pronunciation is Anhuluut’ukwsim Laxmihl Angwinga’Asanskwhl Nisga’a (a.k.a. Nisga’a Memorial Lava Bed Park).It is an amazing place to visit which features lava damned ponds and lakes, tree molds, cinder cones, lava tubes and abundant wildlife. 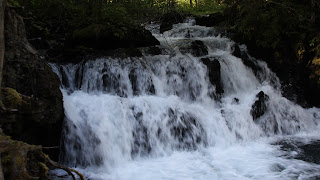 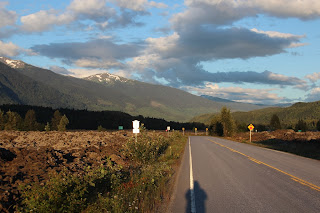 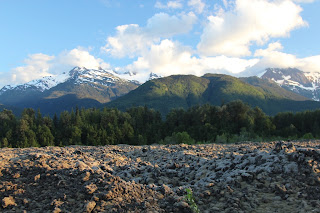 We traveled to the end of the Nass river valley, following the amazing Nass river where it emptied into the inside passage (Ocean).  It was a very scenic ride and the road ended in Gingolx a Nisga'a Village. Form the terminus of the road we could see  Alaska and the entrance to the Portland Canal.  The community itself has four clans which are Killer Whale, Eagle, Raven and Wolf.  Apparently, the name Gingolx comes from the Nisga'a language words meaning "place of the skulls." Apparently they were attacked by another nation, the people of Gingolx held their own. They hung their enemies' skulls on sticks, lining them up along the river as a warning. We didn’t dare even think about spitting or littering in this village. 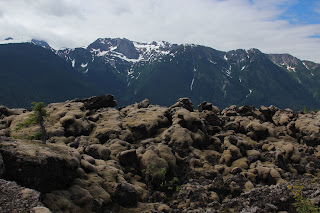 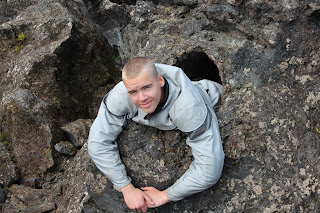 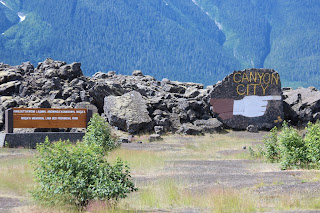 After lunch, we rode to New Aiyansh (traditionally known as “Gitlakdamix”). It is the capital of the Nisga’a nation.


After a good burger, we headed for Stewart and Hyder, Alaska. We took the Nisga’a Hwy over to the Cassiar hwy.  It was about 34 miles of dirt road that was pretty dusty, but fun.

Just before we arrived at Meziadin  Lake we saw our second , third and fourth bears of the trip. All black bears and cute as heck.

We had to stop and get our complementary pictures at the Bear Glacier on the way to Stewart. Along the way we encountered a black bear along the road that was caught between the river and a rocky cliff. The bear had no escape except to waddle down the road for a bit until it could egress the hwy safely. We had a great time herding this bear and even have GoPro video of the event.

We arrived in Stewart with a threat of rain and checked into the King Edward Hotel for the night with hopes of heading up to the Salmon Glacier the next day.
Thanks for riding with us. Stay tuned for the next leg of our trip.

Posted by GrizzLee at 8:49 PM No comments: