Part 2: Tales and Trails of The Chilcotin, Bella Coola and Beyond


I awoke from a good sleep at the motel in 100 Mile House. I got my gear ready for the ride. The first steps out the door were a bit chilly. Little bits of frost everywhere. This was contradictory to the weather report I read this morning. But, I was optimistic and new it had to get better.
After getting the bike ready, I had a coffee at Tim Hortons to take the edge off the cold. From there I took off down the road toward Williams Lake. It was pretty cold, but I was humble enough to put my heated jacket on this morning and turned the heated grips on. Only problem was, one of my grips wasn’t working… Geez, I had just replaced one of them, now the throttle side needed serviced… Sigh??? I know that it was going to be an expensive fix as BMW parts aren’t cheap. I had to let it go and worry about that when I got home. For now I focused on keeping an eye out for black ice and was really happy that my pin shield was working well on the my helmet. No fogging. Fortunately the wind died down pretty quickly and I arrived at WIlliams Lake without incident. There I gassed up and got some breakfast. I called home and checked the weather report. All was good. It was supposed to be clear, but very chilly out on the plateau with a general warming trend throughout the week.

From Williams Lake I headed west with a light breeze in my face and a thin cover of clouds. Colder than I wanted it to be, but it appeared that the clouds were going to burn off and the sun would warm me up as the day wore on. 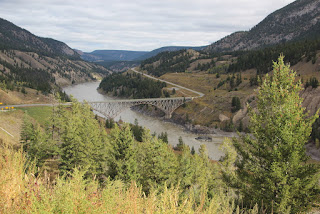 
Before long I found myself passing the Lorantz Tower location (it was dismantled in 2011) and then through Riske Creek. Soon I was on the outskirts of Hanceville. There is a pullout that has really nice views of the plateau and on a clear day, one can see the coastal range and with good lighting, even the glaciers are visibile. Not today. They were socked in pretty good. Fortunately for me, that was to change over the next couple of days as the weather was going to be spectacular. 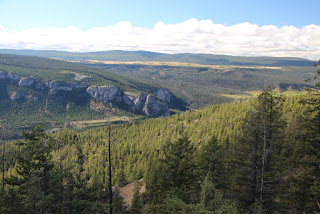 As I came down the hill towards Lee’s corner, I spotted 3 bikes and riders parked. I pulled in to say hi. I was amazed to find it was some fellow adv riders out and about as well. In fact, it was Walter and his friends, Boris and Tom. I had exchanged a couple of emails with Walter before I left home. He had stated that they were going out that way and would be looking for me. We chatted a bit and it turns out they had spent the night out in the bush. They stated that it was muddy, but nothing too bad. I was really wanting to join them, but unfortunately I had made reservations in Bella Coola hoping to come back out this way in better weather. I knew that with all the rain and such, that it still might be a bit dicey out there, so my intent was to visit Bella Coola first and then return after the roads had dried out a bit. As a solo traveler, I have to be very prudent in my planning.


In any event, we parted ways as they headed out to the Nehemiah Valley toward Chilko Lake. Chilko Lake was in my plans and as it turned out, I would arrive there 3 days later. But, I ‘m getting ahead of myself.


After Hanceville I found no traffic as I passed through Alexis Creek, Bull Canyon and really got in the grove. Although, still a little cooler than I likes, the sun was keeping me warm.


Outside of Tatla Lake I came upon a road incident. It looked like a truck had hit a cow. The cow was still lying off the side of the road with birds picking at it and the skid marks told a horrific tale. I hope the occupants of the vehicle were OK. The cow didn’t do well. This served as a reminder to me that this is open range country and that I must be very careful out here. Not only is there wildlife, the cattle and horses are in abundance out this way. I got no photos, but my GoPro did and it appears in my final video production.

One of the things I really do enjoy about travelling in this part of the world is seeing the old cabins and log fences out here. It is a reminder of times gone by. But out here, it appears that time has stood still. No malls, no big housing developments. Just people living in big, wide open spaces. Lots of cattle and even real cowboys, complete with chaps, hats and leather vest can easily be seen out here at any given time.

I soon found myself in Nimpo Lake where I took a big break and got some gas. I was preparing myself for my decent down Freedom Hill. A long steep stretch of road that went from 5000 feet (Heckman Pass) to seal level in the Bella Coola Valley. When I ask about the conditions of the road, a local rancher stated “ You’re going down the hill on that” (pointing to my motorcycle).. “Good luck” he said. I questioned him and ask if I should be concerned, to which he replied “I haven’t been there this year … but it is steep and with all the rain we’ve had this year, it will be treacherous”. Now I was a bit concerned. But I decided that in a pinch I could turn around and come back. After all, I was totally prepared for camping and well supplied. No big worries.

Next up… Getting off the bike and doing a small hike and a visiting with a divine spirit.
Until Next time...
Posted by GrizzLee at 3:25 PM