GrizzLee Stories from the North: Episode 2 - Spirits of the Forest and Bad Medicine

So I wake up from one of the best evenings ever at Fraser Lake. I must admit that I dawdled a bit at camp. Soaking up the views out on the lake and the quietness of the morning. There was a loon calling out that just topped off the morning mood.

Soon I was on my way towards Burns Lake, Topley and Houston. I took my time. The morning light and the temperature were just perfect. 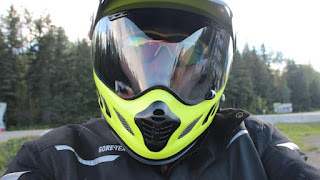 I made a side trip over to Francois Lake and was tempted by a local to take back roads (an all dirt route ) over to Houston from there. But, another local stepped and made mention of the road conditions. Soon they were discussing the possibility of it being under construction. Not wanting to have to back track, I went back to Burns Lake and continued my may along the Yellow Head Highway. 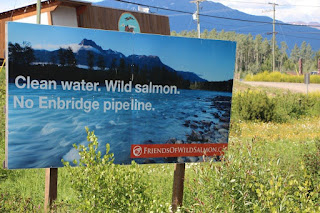 I stopped of r a lazy lunch in Smither’s and did a light wash of my bike. It was already dirty from the rain and mud of the past 2 days. In particular, the smell of the bugs cooking on the engine made me a bit nauseous and I am not sure why. I then made my way over to Moricetown canyon were the Buckley river flows. It is here that one can see natives dip netting for salmon when they are running.

I then went over the Hazelton Bridge and had a pretty clear view out towards the coastal mountains. It was wonderful out by this time. 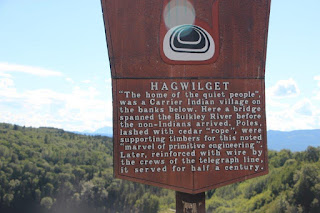 I stopped in the junction at Kitwanga to get a snack. Along the way I rode through a thunderstorm. But, it was short lived and I actually welcomed the cool down. 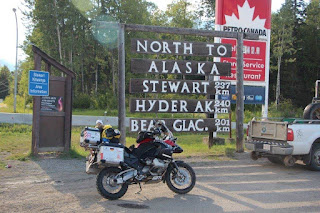 I made plans to head out towards Terrace. Saw a couple of bears along the way and the mountains were delicious. There were clouds and bits of rain along the way, but I mostly had nice sunshine. When I arrived in Terrace is was late afternoon, so I pulled into Ferry Island Campground just outside of town and camped along the Skeena River. I set up camp and went into town to get some Bar-B-Q and a beer to have at camp.  I tucked in for the night and slept very well. I was dreaming about the Nisga'a Memorial Lava Bed Provincial Park. I really wanted to spend some quality time out that way the next day. 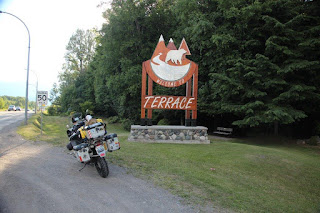 The next day, I awoke to very cool and humid conditions. I lazily packed my camp. But not quite fast enough as the rains came pretty quick and pretty heavy.  Fortunately, my tent and my sleeping bag were already nestled in my dry bags, but my riding gear and boots… well that was a problem. I left camp soaking head to toe in wet riding gear. I gassed up in town and then went to a McDonalds for coffee and free internet to check on the weather. Damn it!! The forecast changed overnight from partly cloudy to 100% chance of showers.

It looked like my visit to Nisga’a was going to be short lived today. Which is a shame, because the park sits in the Nass River valley in northwestern British Columbia, Canada, about 80 km north of Terrace, and near the Nisga'a Villages of Gitlakdamix and Gitwinksihlkw.

The park has waterfalls, pools, cinder cones, tree moulds, lava tubes, spatter cones, a lava-dammed lake, caves and other features created by lava flows. The park contains protected moose, goats, marmots, bears and many other species of wildlife. It is believed that a volcanic eruption and lava flow killed an estimated 2,000 native people around 1700. 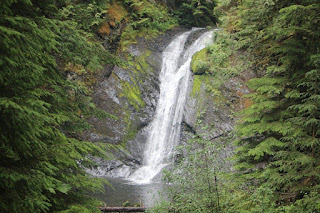 I had no choice, other than turning back and heading back to Kitwanga. So I decided to see what I could and take the Nass River Valley cutoff road to the Cassiar hwy (Cranberry Junction). It is a rough gravel road and travelling it in the rain may pose a problem for a fully loaded bike and a solo traveler like me. But, that’s part of the adventure. So off I went. 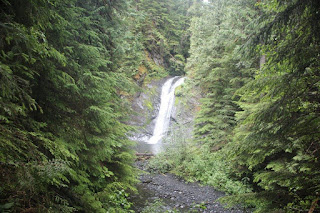 It rained heavy in the park and despite this, I made the best of it and hiked to a couple of waterfalls. The emerald colored water flowing over lava is something that I have never been able to capture on video. But rest assured, it is a beautiful place.

So after doing a whirlwind tour of parts of the park in the rain, I decided to head back over to the Cassiar Hwy to what is called Crannberry Junction and get on the Cassiar. The rain gods decided to take revenge on me, perhaps punishing me for my past sins. As soon as I got on the gravel road, it was miserable. Lots of pots holes and large doses of rain, flooding the road faster than it could shed the water. 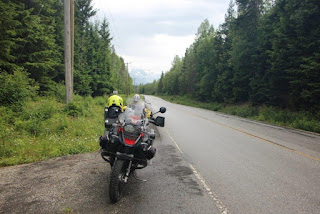 Somewhere along the way, I notice my back end getting a bit squirrely. I pulled over, thinking is that it was the mud. Darn it!! Flat tire. It was not the ideal conditions to be working on the bike but I dismantled my gear to get at my tools, my compressor and my tire plugs. Visual inspection of the tire yielded no apparent damage. So I aired it up and saw a leak. I promptly installed a plug. Upon airing up the tire, I see that it’s not holding air. I can’t quite figure out why until I put my rasping tool back in… that’s when I noticed that this was a big cut as if a razor blade had sliced my tire. To make things worse, when I first stopped and assessed the leak, a couple of guys stopped by breifly a BC Hydro truck to ask if I needed help. They offered to put my bike in the back and take me to Smithers BC. I declined, thinking that the tire plug would be enough to get me on my way. Darn it! Had I known that it was more than a puncture, I would have gladly taken them up on their offer. For what followed was a day of pain that I will never forget.

As I struggled to install more plugs, a couple from England came up on me. The rain had now stopped and I was putting my bike back together. The 3 plugs seem to be holding. The couple offered to haul my gear to the Cassiar hwy to help take weight off the bike. I took them up on their offer. I rode the next 11 miles on the gravel road without problem. We arrived at the Cassair and parted ways. I put my boxes and my bags back on my bike. About 10 miles down the road, the rear went flat. The plugs came out came out and the tire wouldn’t hold air. I grabbed another 3 plugs and installed them and they held for about 5 miles. Now I was out of plugs, and faced with a 20 mile ride back to the Kitwanga Junction on a flat rear tire. Fortunately, one of the local road crew guys came by and followed me (there was no shoulder and traffic can be quite fast on this stretch of hwy). So, I was able to make 10-15 mph on the flat. Thank god for Heidenaus. They are so stiff and the tire didn’t roll off the rim.

Arriving at the Kitwanga Jct store yielded more problems, I was hoping for some help in the way of towing. I was referred to call a local guy about towing and he had no flat bed truck, furthermore, he stated that he didn’t want to use his lift on my bike, because it would mark up the bike and he didn’t want to deal with that. I tried to buy more plugs, but the store didn’t have any, but rather they had green slime. A couple of bikers came by and gave me their tire plugs. That and the slime seem to hold air as I rolled around the parking lot. SOO I took off towards Smithers at 30 MPH. My joy was short lived as less than 10 miles down the road, the plugs came out again. It was now about 8:00 am in the evening and it was raining off and on. Lori (my support back at RubiKon Headquarters in Wa) made a room reservation in Smithers, so I moved on, even at 10 miles an hr. My hope was to make it to Smithers without the tire coming off the rim. Being the cautious person, I kept stopping to air up the tire to ensure that it stay seated on the rim.I estimated that I must have ridden nearly 90 miles on that flat. A testament to the Heidenau K60 tires I rolled into Smithers at 1:00 am. I was one tired dude. I didn’t have dinner that day, took a quick shower after unloading my bike and went to bed. Fortunately, the power sports shop had a tire for my bike. So I would be good to go.

I spent the next day getting a new tire installed (it was a bit costly) and cleaned up myself, my clothes and the bike. I stayed one more night in Smithers before heading north. It was a set back, but it was still early in my journey. I had many more days of fun ahead.