Church in the Mountains - Sunday Hike to Snow Lake

My father considered a walk among the mountains as the equivalent of churchgoing.  ~Aldous Huxley
The weekend consisted of a fun day of kayaking in Burrows bay around Burrows Island and Allan Island. Allan Island is owned by Microsoft Co-founder, Paul Allen. We also stoppepd at an abondoned lighthouse on Burrows island and took a nice rest at a Watertrails camp on the island. Unfortunalty, no pictures were to be had that day as we left the camera behind. Which was too bad. The paddling and the views were fantastic.

Sunday, that was a different story, my buddy Steve and I found oursleves at the base of Snoqualmie peak contemplating whether if we could make it up above the falls to cave ridge and then traverse over and climb Guye peak. In the end, we assed that there was still too much snow and the effort would be more than the reward. We opted instead to hike to Snow Lake. It was an excellent choice. It was a warm day with summer-like heat and we found ourselves amoung 4 other snow lake bound hikers scrambling throught he snow up to the saddle. We had a great solitude experience. A rare treat for a lake that is usually so crowded during the summer months. 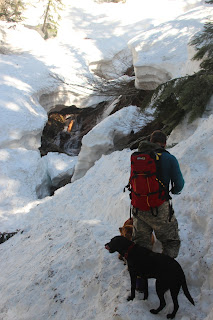 Before we could get to the lake, we were going to have to earn it. Up, down and around gullies like this one filled with a snow melt falls was the norm for the day. 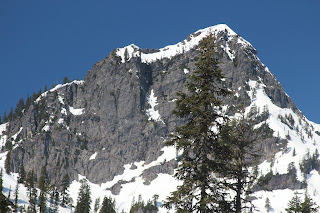 I believe this peak is "The famed Tooth'. The Tooth is a very popular peak in the Snoqualmie Pass area near Seattle. It is within close proximity to Seattle with an easy approach, and a fun moderate climb. The South Face route is a classic climbing route ~ 400 feet of blocky Andesite above Pineapple Pass. Like all peaks in the area, the summit views offers are excellent. 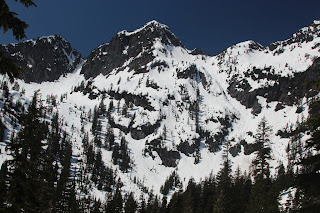 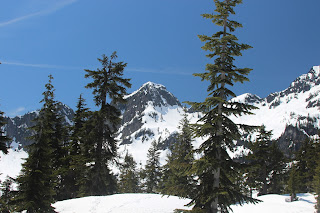 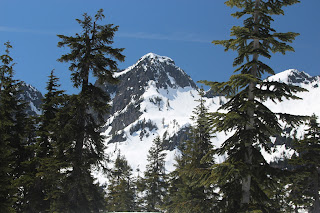 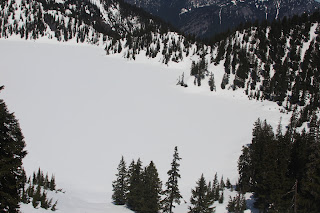 This is Snow Lake... aptly named, as it is still covered in snow. 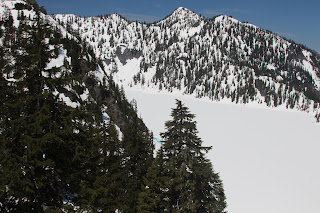 More lake as it wraps around from the end of the Melakwa valley below Chair peak. 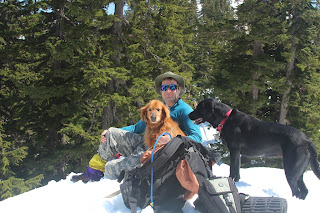 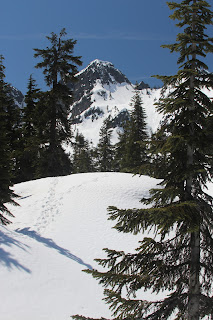 A quick jaunt over to the next knoll revealed.... nothing... except more spectacular beauty and a view down the valley toward Source Lake (also buried in snow).

On the way out we found an old rotting tree and with our help, it fell pretty easy onto the snow.

All-in-all... a very good weekend. Two weekends of sun... it won't be long until the winter snow releases the mountains to us impatient hikers.