Yukon Johann's account:
"We were one the flip side and returning home when something bad happened. I crashed the bike just 85 miles South of Dawson City, Yukon on the Klondike Hwy. We were going about 60 miles an hour, we were coming up on a corner, just before it my steering started wobbling slightly, it didn’t seem like much at first, it started to correct itself. I couldn’t have been more wrong though, I must have hit something in the road that made the wobble more violent. The rear wheel swung out to the right and got caught on the soft, gravel shoulder which had quite the steep drop to it. The bike got sucked into the gravel and now both of my wheels were in the dirt with one going all over the place. I didn’t want go down the steep slope (more like a cliff with trees) to my right so I turned the bike over to the left and slid the bike all the way across the road. I remember looking back toward where I came from when the bike spun around and seeing all of the things flying off the bike, the mirror snapping, the right turn signal light breaking off and pieces of my boot being shredded to pieces and being thrown all over the road. The bike spun around a little more, facing the ditch on the side of the road I was sliding into, I remember seeing the ditch. The next thing I saw was the bike flying right over my head, barely missing me. I stood up almost immediately and thought "WOW! i cant believe this just happened." Immediately after I got up someone pulled over to help us, he offered to get all of my gear and put it in his truck and take me to the nurses office. We went to the local nurses office in Dawson City, she told me I was one of the luckiest people to ever come out of a motorcycle crash at that speed and come out walking with only scratches, burns, and bruises. Despite how fast I was going, and what happened, the bike is in really good shape and looks like it can be repaired. 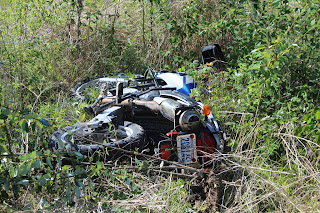 That same night, we unpacked everything and looked all of the things my dad would need and set that all aside, and the things he didn't need we packed into my panniers. The following morning we took all the panniers over the airport and got them checked into the flight. we said our good-bye's and departed. I could tell my dad was very sad about what happened, so was I, but I was just really glad that I came out okay and I'm able to tell about what happened.
A father's view:
The evening we came back from the Arctic circle and we were back in Fairbanks, Johann mentioned that he experienced some wobble. We discussed this a bit as he said it occurred over an area with severe frost heaves. Unfortunately, I dismissed this discussion to something minor due to the road conditions. In hindsight, should I have been more diligent? I don't know.

I did a bit of research on speed wobble and discussed this with my experienced mechanic here in Seattle. There are many factors that contribute to it. Higher suspension bikes are more susceptible. Load the bikes up for a long trip and throw in a few frost heaves.. who knows... I am in the process of seeing if I can get a steering damper installed. Johann seems to have no fear on getting back on the bike, but I am afraid now.

Read the next chapter of the journey... The Long Lonely Ride Home