Part 8 (The Finale): Tales and Trails of The Chilcotin, Bella Coola and Beyond


The next morning in Clinton, I had to say goodbye to both, Paul and Brent. They had a ferry to catch, or rather I believe that Brent had a ferry to catch. So they left pretty early. I was in no particular hurry, so I after getting my bike ready, I ambled back to the Old Schools Bar and Grill for Breakfast.

I had the best tasting breakfast on the entire trip here. I fueled up with coffee and surprisingly was able to make a phone call home from here to let the missus know my whereabouts and plans.
My plan was to head slightly north and take the Big Bar Road over to Big Bar Lake. This is a section of the Big Bar Road I have never been on before and always wanted to see the lake.
The ride was not much to see, except for the fact that I could now see the backside of the Marble Range. However, clouds were forming and the forecast was for rain. I was hoping that I could finish up the dirt portion of ride today before hitting the slab and heading south for the border.
I came upon Big Bar Lake and was surprised to find the area more developed than I had imagined. The lake was lined with cabins and the campground was really nice.
As I toured the campground I came across one campsite that was occupied by a bear trap. A nice hunk of meat was hanging inside the trap ready to spring on the unsuspecting bear.  In my travels near this area before I have come across numerous black bears, especially along poison lake road and out toward Canoe Creek. So this was no surprise to me. Apparently one of the buggers was getting too friendly with campers and action had to be taken out.


Shortly after leaving the lake area, I came to the junction where the Poison Lake road joined the Big Bar Road.  My goal was to head south and take the Big Bar Ferry across the Fraser River and ride the Pavilion Road back to Lillooet. Which I did.
Along the way I passed the Big Bar ranch and numerous pedestrian cattle along the road. At some point I came across an outlaw wanted sign complete with a made up figure (life size) of a fictitious criminal. Now, I must admit, I was looking for this because every year it seems that one of the local ranchers (Big Bar Ranch?) has different criminal displayed with a new wanted sign stating the list of crimes they’ve committed. This year, it was the “Silver Fox” an older gentlemen who was a well known chicken thief. Free bucket of KFC for information leading up to his arrest  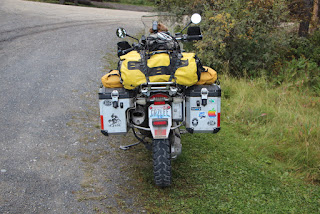 From there I turned at the Big Bar Ferry  junction that headed west down the canyon toward the Fraser River and the ferry crossing.
The ride through here is really nice as one gradually drops down from the high plateau area that is fully forested to an aired desert-like gorge… actually more like a miniature grand canyon.
Several years ago I rode through this same area while the locals were finishing up battle with a wildfire. It was interesting to me to see how the land was recovering. In one clearing area, all the brush and trees were completely gone, however, a lone tree stood out; the top burned and the bottom burned, but the middle section seemed to be doing well. I called this tree “survivor” and it serves as a reminder of how mother nature can be fickle in this land.


From there I came out of a slot in the canyon that was perpendicular to the Fraser Canyon. The views were stunning as I looked at the road I must travel on the other side. It was quite steep and intimidating looking. Especially for a solo traveler on a large bike, fully loaded for adventure.

I made my way down to the ferry crossing and waited about 20 minutes before the ferry operator came out and waved me on. We chatted a bit and he apologized for the wait. He assumed that other bikes would soon follow me as he said that it is rare for a single individual to pass through this area. No biggie I said. I could stay here all day and soak up the scenery, except, I knew there was rain on the way.

A bit about the ferries in this parts is in order. This ferry, and a couple of other like along the Fraser River, are “reaction ferries”. Reaction ferries are very efficient when implemented big rivers with fast moving current as they are attached to a cable and utilize the river current to propel them across using a simple concept of redirecting flow on lifting surface (rudders) in the water. 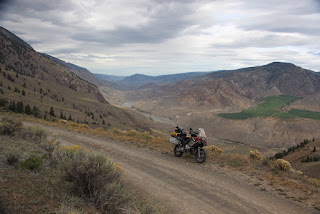 Once across, I began the laborious ascent up the canyon. I won’t lie to you. It was steep with sharp switchbacks and deep ruts in places from all the unusual rains this area has experienced over the summer. More than once I was fearing a tip over, or even worse, having the bike slide off the road after a tip. It would be impossible for me traveling alone to recover my beast from such an incident.


Once I got out of the steep sections with the loose rocks and ruts, I could rest easy as I knew that rest of the way was relatively benign… at least based upon my previous travels through this area.


Before I completely “summited out” of the canyon, I stopped to reflect on my trip and enjoy the immense beauty this country has to offer. In all my travels north, there is nothing I have seen that compares to the vast, steep, undeveloped country that the Fraser River offers here. It is humbling and foreboding country. 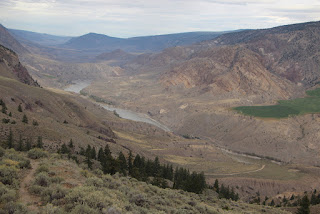 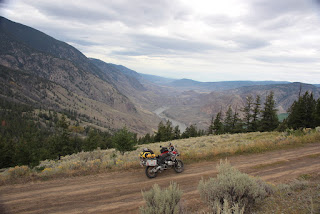 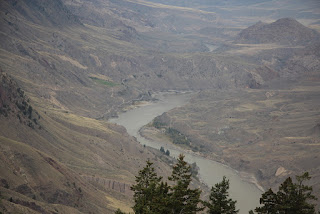 Now that I was high above the canyon floor, I was able to take my time and ponder about all the land around me. One such area offered a deep look into a step narrow river creek drainage. I could see huge cuts in the canyon form glacial flooding and large outcroppings of rock. “Rugged” was the term that came to my mind, time and time again. Beautifully “rugged” country for sure. 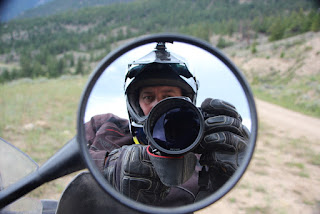 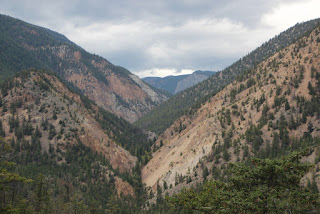 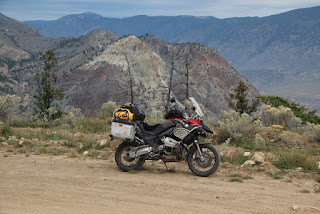 In any event, as I got closer to Fountain Valley I had my first encounter with people. Two dualsport motos (both Husqvarna’s I believe) passed me. We actually stopped a bit to chat. They had started from Williams Lake early that morning, riding all dirt down to Lillooet. Their plan was to circle out towards Carpenter lake area and return the next day. They however, knew rain was coming and they were none to happy about it. 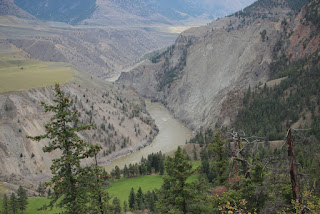 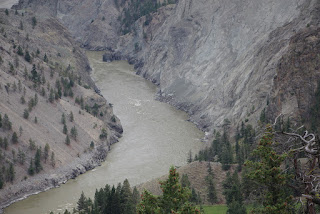 After our brief encounter, I circled around the mountains and came to the overlook of Fountain Valley. It was at this point that it began to sprinkle. Nearly perfect timing for me. I was nearly off the dirt and would be arriving in Lillooet shortly. As I got closer and closer to Lillooet the rain got more intense. At a pull out I came across a group of German riders that were outfitted with Urals. They, like me were kitted out for an expedition. They had lots of and lots of questions about the road and my trip, but unfortunately for them and me, I don’t speak German and their English was almost non-existent. The best we could do was stand underneath a raincoat and point at the map.
I wished them luck and arrived in Lillooet soon after. I gassed up at the Canadian Petro store there and grabbed a sandwich. The gas station there had a little covered sitting area outside so I was protected from the rain. I called home and checked in with the missus.

It was around 4:00 in the afternoon and I knew that it would be tough to get home now with the rain. What I eventually did was ride out to the confluence of where the Fraser river and the Thompson river joined, at a town called Lytton, and rode south along the Fraser River canyon past Hells Gate and the numerous tunnels. I knew this road well. Normally I enjoy this ride, but with the rain and the big trucks spraying mist all over me … not so much.
I ended up spending the night in Hope and making an early start the next morning… in the rain…. Whereby I retraced my route back to Abbotsford via Harrison Mills and the back roads to the Sumas border crossing. I arrived home about noonish, soaked but with a BIG, BIG smile on my face. It was one heck of a ride that I will never forget.
I thank you folks for sticking with me and reading this report and “virtually” riding along with me in my video.
If you are ever in the Seattle area, either passing through on a bike adventure or even want to find out more about my travels north… drop me a note here or on google. All riders are welcome. I will have a beer and bunk waiting for you. As I always say… your only payment is a good travel story.

Take care and safe travels.
-GrizzLee
Posted by GrizzLee at 6:45 AM