"Love calls, but do we really live the time we're running through?
Or like a dream, do we let it die and drift away to sleep
Until it screams like an echo in the history books you keep"
~John Hiatt "Straight Outta Time"


This fall, I had planned a follow-up ride to Bella Coola. A trip that was to last 6 days. I did a similar trip in 2011 (see my blog post: Solo Motorcycle Adventure: Bella Coola, Gang Ranch, Chilcotin & Fraser River ). My itinerary included a great deal of travel on dirt roads (~half of my travels were on dirt, 4x4 and gravel roads). The country is like nothing here in the lower 48 states. I left my home near Seattle and traveled Wa state hwy 9 to the Canadian border (Sumas). From there, I rode up the West side of Harrison Lake to Mt Currie. I proceeded through some freshwater fjords over to the Caribou-Chilcotin Plateau through the coastal mountains to Bella Coola. The country is remote, largely undeveloped, contains no paved roads (save for Hwy 20 from Williams Lake to Bella Coola) and contains lots of wildlife. Aside from that, the scenery is absolutely breathtaking as I traveled through several climate zones from desert country to high mountains to coastal rain forest. The vistas included high desert mountains, glacier covered peaks, deep and wide canyons carved by glaciers and big rivers. I felt like I traveled back in time. The country life in the Chilcotin-Caribou plateau is simply amazing and the people are warm and friendly. I traveled on every type of road imaginable (pavement, dirt, rock, gravel, chip seal, etc..) It is the ultimate dual sport destination and a perfect test of my skills on the large BMW R1200 GS Adventure.
This is my story... my solo adventure motorcycle ride through remote lands where I camped every night except one. I had no real itinerary and a vague plan of the route of where I wanted to go.
Day 1 (Aug 31, 2012)
Note: Click pictures to enlarge
I left my house in Sammamish, Wa around 6:00 a.m.

I just had the 24K service performed on my bike and new tires not long before. I didn't quite have time to get and install all the new farkles that I wanted (such as a new skid plate, Hiedenau Scouts and other key protection) for my off road portions of the trip.

I debated with myself the advantages/disadvantages of taking my tank bag. Pros... my SLR camera was more accessible; Cons... It gets in the way when I try and man handle the big bike and gas it up. In the end, I decided that I'd take it take it. Since I was traveling solo, I would have to rely entirely on my own personal photo skills to document the trip. I also carried a Gorrilla pod to take those pics/videos of me from afar.
So here I am all loaded and ready to go. Tent, food, stove, clothes, water filter, cameras, camp chair, sleeping bag, sleeping pad, maps, bear spray, GPS, Personal Locator Beacon, camp towel, soap, tools, compressor, extra parts for minor road repairs, etc...


Because of the remoteness and lack of cell phone service, I will not have contact with them until I arrive at Bella Coola. I do carry a personal locator beacon with me and bear spray.
I ride Wa. state hwy 9 up to the Canadian border and cross at Sumas.From there, I head up to Mission B.C. and over to Harrison Mills. Although, I have been to B.C. many, many time, I have never been to Harrison Lake.


I turn north at the Sasquatch Inn. This is where my map and GPS tell me where to go.


At the first opprotunity, I stop to deflate my tires (25 psi on the front and 35 psi on the rear). At this point, my Tourances are performing just fine. I will leave them at this pressure for the next 3 days as I will be traveling almost exclusively on dirt.
Having a snack and I really begin to look at the lake, My God, it is beautiful.


I ride up another 10 lazy miles or so. It is "bone dry" and "Gretchen" (the German name I've given to my sassy big girl) is looking good in her new white wall tires.
﻿﻿The lake is amazing. This picture is crooked, ( I assume) because I am trying to stay upright on the side of the gravel road to get a better view. Maybe it is from wobbly knees.

At one point, I think I died and went to heaven.
I wanted to stay, but I still had a long way to go.

My riding partner and navigator told me we had to press on. Oh, yes, you thought this was a solo trip report. Not entirely true. Please let me introduce you to "Hyder". He is from the central B.C coast, his mom is a beautiful Kermodo bear and his dad is a big fisherman outside the town of Hyder Alaska. "Hyder" (pronounced "Hi-dare", slang for as in Hi there) joined us on our trip big home from the Yukon this summer. He has since become a permanant travel fixture on my bike.


﻿In reality, my travel companion is a tribute to Chris Morgan and his conservation efforts through Bear Trek around the globe. I encourage all to read about Chris and his global adventures. He is one of my heroes in the area of wildlife conservation.
﻿

Demonstration of how to wash your back in remote back country.
This footage was taken at the north end of West Harrision Lake FSR.


At the far north end of Harrison Lake, the road began to get a bit rough. It was, in fact, where certain sections required 4x4 vehicles. The big GS and all my gear was a concern. The views, however, were getting better as the valley wilderness began to "swallow" me and my bike.

This video demonstrates the typical road conditions encountered at the north end of the lake.


The north end of the west Harrison Lake FSR dumps into this logging camp. 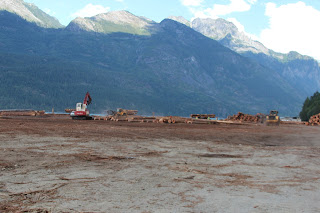 Tipella, also historically known as Tipella City, is a locality near the head of Harrison Lake in southwestern British Columbia, Canada. A real estate venture from the early 20th Century, the development of a "city" never came to fruition though the placename remains on maps today, and is the name of the airstrip nearby, which serves Port Douglas and nearby logging camps. It is also the source of the name of Tipella Indian Reserve No. 7, which is one of the reserves of the Douglas First Nation, and of Tipella Creek, which enters Harrison Lake at the foot of the locality.(Ref, Tipella, British Columbia, Wikipedia )

﻿As I go to sleep that night, I am lucky, in that I have no thoughts of work, traffic or the daily grind in my mind. It was a great day indeed.

To travel alone requires a bit more research and safety mitigation. I had my doubts about this section of my trip. I would like to thank Chris (beemer67 ADVrider) and Colleen (DantesDame) for their advice and help. It proved to be invaluable in building my confidence and in my final decision to ride this section of my trip alone.