"When in doubt, use full throttle. It may not improve the situation, but it will end the suspense" - Anonymous

This is my story... my solo adventure motorcycle ride through remote lands where I camped every night except one. I had no real itinerary and a vague plan of the route of where I wanted to go.

I left Lac La Hache Provincial park with sadness on this day. I knew that by the end of the day, I would be home, all wrapped up in the blankets of my bed and thinking about work the next day. It was going to be a long ride home. I wasn't really sure if I had time for one more side detour. I've ridden Hwy 97 before back to Seattle and it can be a chore in two lane traffic.

I had a quick breakfast, and off I went. Before long, I found myself passing an RCMP officer in a town called 100 Mile House. I quickly slowed and the RCMP sped up beside me and paralled me through the town. I thought I was in trouble for speeding, although, I wasn't going that fast. I looked over and he gave me the thumbs up. He was looking at my ride. I felt lucky. I gave him a friendly wave back and he turned off and made a u-turn back into town.

Shortly thereafter I came upon Begbie summit, the highest point on the Caribou Hwy (Hwy 97). The summit was named after a judge known as "The Hanging Judge". Shortly there after, I was nearly in the town of Clinton. 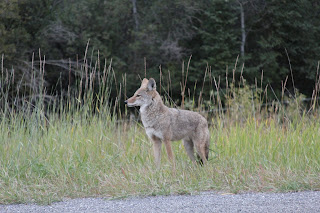 I ran into this guy out side of Clinton. He (she?) was scouring tthe roadside for a meal. He didn't seem to mind my presence. I stopped and took some video of him. 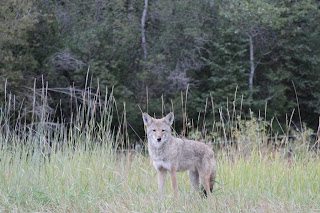 He looked at me several times as if I was going to feed him. This was a bad sign. Obviously he has been fed. I departed and wished the guy luck. 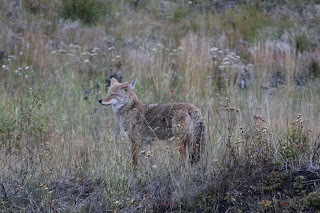 He gave me a nodding approval, as if he understood my concern, but seem to tell me not to worry. 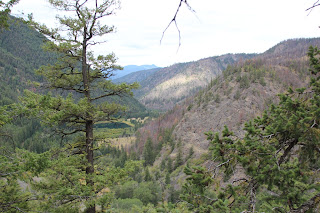 In Clinton, I made a decision to ride some more dirt. I figured I could retrace my steps form a couple days before and head over to Pavillion via the Clinton-Pavillion shortcut. From there I would head out to Lytton and re-join Hwy 97 (Hwy 1?) south of Spences Bridge. I haver never been down that hwy (Hwy 99), so it would be something new for me. 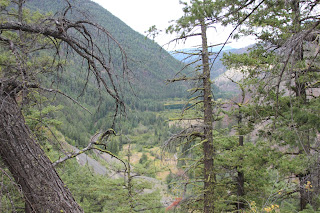 The above photo and the one above it were taken on the steep grade going up to the high plateau above the Fraser Canyon. It was an 18 % grade or maybe more. 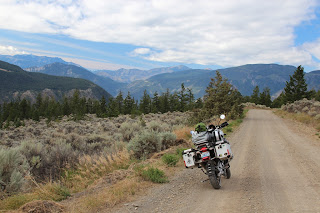 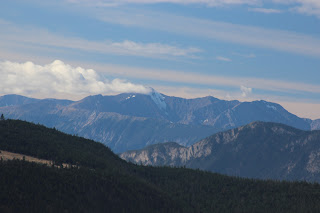 In the distance, I could see the cold air coming off a glacier kissing the warm morning air. It looked like a volcano eruption. 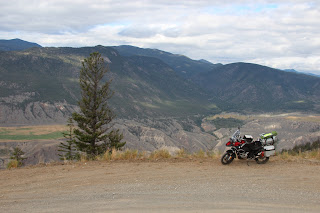 I began my descent down the canyon escarpment. 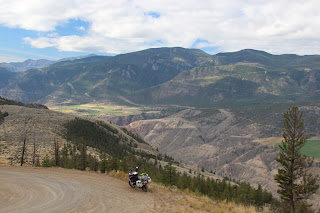 BEAUTIFUL!
From here I could get peek a boo views into Fountain Valley. 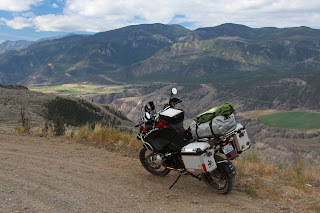 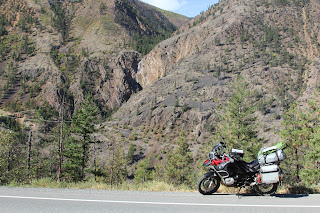 Cool waterfall just before I arrive at Lillooet. 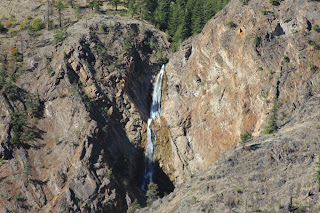 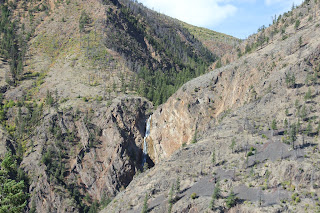 My web research tells me tha this is Dickey Creek Falls
Located just north of Lillooet, this waterfall is also known as Honeyman Falls in winter and is an awesome ice climb. 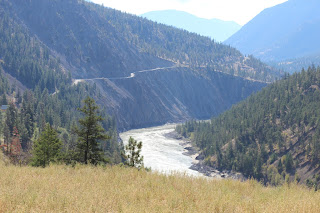 Shortly outside of Lillooet, I come across some of the most interesting stretch of paved hwy I've ever seen. 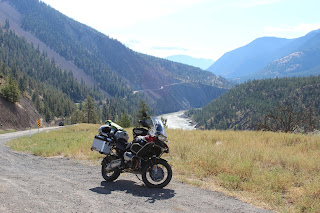 That narrow track of road behind my bike is known as the "Big Slide". This is because the geology in question is unforgiving and the engineering problem it poses - The mountainside crosses "rotten rock" from the top of the ridge right down to the river. Not much has changed on the road since it was first built. The road has to be repaved every so often because of all the falling-rock damage. I was unble to get pictures of the road as there was no stopping allowed in the "slide area". There were sizable rocks in the road. It is not an area where one would race their bike through quickly without consideration of safety.
﻿Goats? Nope, these were sheep. They surrounded my bike like a flock of protective hens. They were very inquisitive. 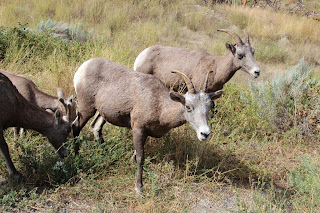 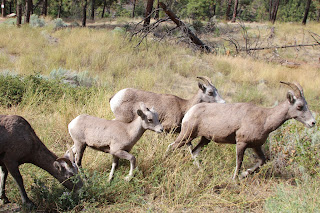 After awhile, it was time for me to get moving, so a quick beep of my horn and they trotted away. 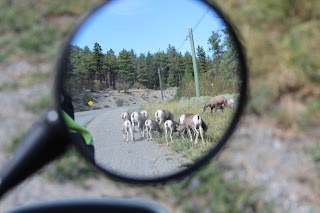 I thought this was quite funny as they "mooned" me in my rear view mirror as I drove away. Cute buggers.


This was the last picture of my trip. I quickly rode through country that was all too familiar to me along the Fraser canyon to Yale and finally to Hope where I turned my bike west. I wanted to make time and avoid the evening traffic outside of Hope and across the US-Canadian Border in Abottsford. I wanted to get home before dark. I took Washington state route 9 back to my house in Sammamish. I arrived home about 8:00 in the evening.
WOW, what a ride! This was without a doubt, the best motorcycle ride I've ever taken. I've said it once before, but British Columbia is AWESOME. I can't wait to return. Wether riding the remote back roads, hiking in the high country or paddling her beautiful lakes. B.C. is, without question, one of the most beautiful places on earth.
Thanks for riding with me. It was fun to re-cap the trip in this ride report. I hope you folks enjoyed it.

I posted my route here on Google maps for any one who is interested:
GrizzLee's Bella Coola Adventure Route