Solo Beyond the Northern Hinterlands 2015: The Cassiar

Perhaps the most remarkable road in British Columbia ... This is a true wilderness road without the gravel. If you want malls and plastic trinkets made in China... STAY HOME! It's too bad that they paved this remarkable road. Time is catching up here. The sides of the road have been cleared and huge power lines now line the highway. Mining and other resource extraction are in full swing. Too bad. This was once "the road" to travel north on as an alternative to the fully developed Alaska Highway. Before the Cassiar was paved, it gave travelers a taste of what travel was like on the AlCan before it was paved.

Email account from the road. Note: Smithers is about 1.5 hours from the junction of the Yellowhead hwy and the Cassiar.

Best riding weather so far. Not hot, not cold. Threat of rain off and on. I met a fellow mechanical engineer from Sacramento this morning. He and his wife were riding 2 up on a Tiger 800. Then I met 3 brothers (1 from Cal, 1 from Ark, 1 from Oregon). They were riding 2 KLRs and an R1200 GSA. They are heading my way up the Cassiar, We keep leap frogging each other. We will probably end up in the same place at the Meziadin Jct Camp tonight. Some day, maybe, I can do the same with my brothers.

Bike is running good. I got a good nights rest. Shower, and the room had AC. Whoohoo!!! Washed my socks and underwear in the tub :-) Good to go!!!

If all goes well, Should be touring Hyder and the Salmon Glacier tomorrow. Then head up toward Bell II and beyond. I am hoping that the weather gods favor me and that I can ride the Nahanni Range Road by weeks end. It is going to take some marbles to ride that road alone. 400 mile sand no fuel services. I am not going to ride it if there is any hint of wetness. The roads up there are hell to ride when wet.

The bike starts every time now. Everytime I turn the key there is some hesitancy in my mind.  But she fires up like an excited dog ready to run.

All is well. I suspect that this will e the last internet connection I will have for awhile. Services are very limited from here to the Yukon Border. I like that. The Cassiar is a lovely lady to ride. She's beautiful, untamed and still has many virgin lands.


Gitanyow is 20 KM north from Kitwanga and the southern end of BC Highway 37. The village is on a short side-trip loop. Cedar poles announce the owner's clan status and inherited family traditions. Clan crests portray mythical creatures some in human form from the legendary history of the clan.They show the great artistic skill of the native people.

The plight of the first nations people in this area and their fight to preserve "their" lands is a sad story. See here for more http://www.cathedralgrove.eu/text/06-Totem-Poles-2.htm 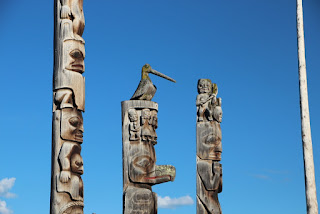 So I met up with Paul, a retired university Prof of Engineering, at Kitwanga. We had dinner together and enjoyed the company of another young rider who lived in Terrace BC. This rider was just finishing his cross Canada motorbike adventure.
Paul and I shared at camp at the Meziadin Lake campground. Unfortunately for Paul, he was on a tight time schedule and missed the glaciers on a rare, but spectacular sunny day. Hyder is in the the coastal rain forest and just beyond the mountains to the west lye the Misty Fjords National Monument. This area is rich in icy blue lakes, waterfalls, snow capped peaks, glacial valleys. Saw many bears and even got video of a mother and her cub.


I had been in this area a couple of times before, this time was areal treat. The gate that normally blocks the road to the Granduc Mine was open, but for good reason. Just 100 yards or so beyond it was a nasty rock slide. To narrow for normal vehicles to pass, but not when one rides a bike. I rode my bike between the slide and the perilous cliffs below and entered a wonderland of wilderness.


I thought about camping in the Salmon River Valley, but the area is littered with black bears and many grizzly bears as well. So, I decided not to hang out over night. 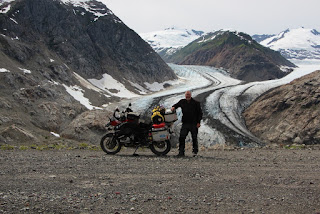 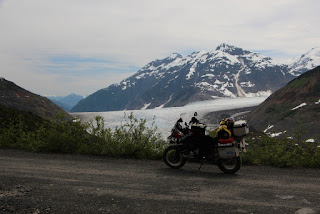 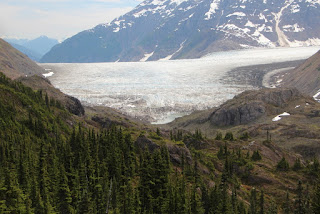 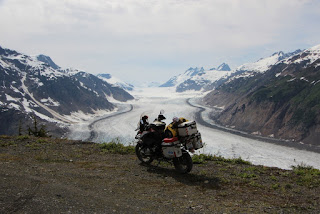 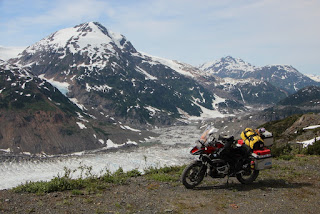 Once I reach Hyder, I notice the rear wheel feels a bit squirrely. I stop to look at my rear tire and I notice it is low... only 5 psi of pressure. Over 70K miles on my bike through numerous forest lands, several  expeditionary trip, mountains and even a trip to Prudhoe Bay and yet, this was my first flat tire ever.
A 15 minute stop to put in a plug and off I go. The tire held out for nearly 3000 miles.

I'm holed up at the WatsonLake Visitors center. They have free WiFi.
Words cannot describe the past 2 days. Met a couple of great guys and we travel together  yesterday and today. One guy from Indiana on a Harley (and a trailer in tow) and another gent who was from Brazil (A professional photographer) riding a new 2014 GSA.
Stopped in a Jade CIty.  It was a cold ride this morning! Here in Jade City, they are filming a reality TV show called Jade Fever. It is airing on the Discovery Channel in Europe (not yet in the states). Had a great time interacting with the family (the focal point of the show) and my new travel buds,
At the AlCan we parted ways, as I was heading to Watson Lake and the other guys were Alaska Bound.
Just two days before, I was in Hyder. I drove up the mining road to see the Salmon glacier at the US/Canadian border … A pretty remote place. It was an AWESOME spectacle to say the least. There was a slide beyond the summit blocking an area that is normally closed to outsiders. The gate that is normally closed and blocking the road was open, however, the road there was a bit tricky as there were places where only a narrow vehicle could pass between the avalanche snow drifts and the cliffs. I had no problem negotiating these obstacles. However, once I reached the slide area, it was only wide enough for bikes and pedestrians to pass through. No problem for me. Still, for a hiker, it would have been a good walk to see the goodies I saw. I got into the back country that I have never seen.  There is another arm of the Salmon Glacier back there that is just as spectacular as the one view at the pass. I also got to see the gold mine camp and facilities. These were all empty as the road was blocked. I contemplated spending the night in the valley, but the area is thick with bears, including Grizzlies. Since I was alone and no one else was around for miles and miles, I decided to leave. On my way out, there was a mining crew coming up the pass with trucks and equipment to clear the slide. I am thinking that if I had spent the night, I may have been locked in.
As I left Stewart and Hyder I experienced a first in my motorcycle career. I had my first flat. No problem, "snot on a string" to the rescue. God I love having tubeless tires!!! It was easy and seems to be holding up.
I was thinking of heading up the Nahanni Range road but the weather is iffy. The locals told me to wait until tomorrow. It is supposed to be near 36 deg Celsius ... HOT!!!
I was all warned that tent camping up there is not advised due to the high Grizzly bear concentrations up  that way. This had me re-thinking my plans. SOOO, I am thinking of going up early tomorrow morning and coming back to Simpson Lake in one day. It will be over 300 mile of gravel travel. If I stay at the Air Force Lodge in Watson Lake, I may be able to unload some gear as well. We'll see how it goes.
Only wildlife I’ve seen is bears, more bears, foxes and one moose.
I wish everyday was as fun as the past 2 days, I suspect there will be some trials ahead.
Oh, a couple at Dease lake gave me their pizza. It was a token for the advice I gave them on traveling the Stikine Canyon to Telegraph Creek. Wish I had more time, I would have gave them a guided tour. Maybe on the way home... Too much too see and not enough time. The Stikine Canyon is best described as “the Grand Canyon of the North”
While in Hyder, I got my picture taken with my bike and the bears on my bike for the Hyder Webpage and news paper (Facebook). I will have to check it out.

Addendum:
While in Watson Lake, I had dinner with two guys going to Prudhoe  Bay. One was on a Tiger 800 XC and his buddy was on a R1200 GSA ... just like mine. We had to help push start a gent who was on a Honda Interstate. The irony was, his starter went out. I asked if checked all the wires ...  Just to cover all the bases ;-)  Indeed his starter was gone. He said he only paid $1000 for the bike. It needed work.Too make things worse his windscreen was destroyed by a rock and he was wearing  an open face (nearly a skull cap) type helmet. He was tired of picking bugs out of his teeth. He needed to get to Anchorage for a wedding and then was going to fly home and sell the bike before he left. The bike was a piece of crap. He shouldn't be riding it up here.
Getting back to the two gents going to Prudhoe... One of them works for Northrup Gruman in So Cal. He is a systems engineer. So we talked shop a bit. He is wanting to come to Boeing. I told him the process for applying.
Kathy's Kitchen in Watson Lake... They still have great burgers!!
In any event, it started to rain and I decided that a shower and clean clothes were in order. So I am here at the Air Force Lodge in Watson Lake. This bed is very comfy, much nicer than the tent :-) The lodge is clean, comfortable and cheap. Run by a German named Mike, so you know it is impeccably tidy. The lodge itself is historic and played a part in the war effort,
I am heading off to the laundromat and the gas station. Preparing for my next leg of the journey up the Nahanni Range Rd. Everyone I've talked to says it is beautiful, but it is remote. Hard to carry enough gas for 400+ miles. Even for my big GSA. I think I got it figured out.


Stay tuned for more.
Until Next time...
Posted by GrizzLee at 8:45 PM