Solo Beyond the Northern Hinterlands 2015: The Nahanni Range Road

The Nahanni Range Road was completed in the early 1960s from Watson Lake, Yukon along the present alignment of the Robert Campbell Highway to Cantung Junction, thence along the Highway 10 route, across the border into the Northwest Territories to the privately owned mining town known, confusingly, as either Cantung (for Canada Tungsten Mining Corporation) or Tungsten (for the mineral mined there). The portion between Cantung Junction and Watson Lake has, since 1971, been part of the Robert Campbell Highway (Yukon Highway 4).
The Nahanni Range Road proper is entirely gravel, and is not recommended for general public use. Originally, two-thirds of the route was maintained by the Yukon government, and had campgrounds for public use. The remaining third was maintained by the mining company, open to public traffic, but with no public facilities at the town. When the mine shut in 1986, the road fell into disuse and maintenance became increasingly difficult. Since the mine resumed intermittent production in 2003, the road has been restored for the use of the mining company, but general public travel is still not advised. 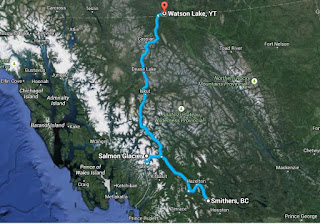 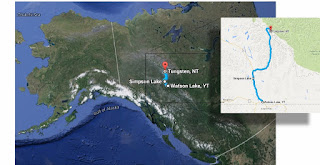 With this information and knowing that I had 400 miles round trip without fuel to go up and back, I purchased another 2 gal fuel container. My big bike already had a 8.7 gallon tank, and I was carrying 2 extra gallons. But still, being the cautious person I am, an extra 2 gallons would ensure my trip.

After a relaxing night in the Watson Lake, I stayed at the Air Force Lodge, I left town on the Robert Campbell Highway. Shortly after the pavement disappeared, I ran into some of the worst road construction I have ever encountered. Deep sand (clay powder actually). They diverted the road into the worst possible route for a motorcyclist. The powder was made worse by the fact that deep ruts had been formed by trucks which lie hidden underneath the powdered crap. All the while, grabbing my wheels and tossing the bike from side to side.  A heavy adventure bike fully loaded with extra fuel was almost too much. I road approximately 15 miles through this stuff with my legs spread to the side, nearly dumping the bike several times. Thankfully, I was alone and no other vehicles were in front or behind me, so I could crawl along at my own pace without the nasty dust or pressure from a vehicle to pass.
I reached Simpson Lake just as the nasty road improved. From there I made my way to the junction of the Campbell Highway and the Nahanni Range Road. A place called Tuchitua. Tuchitua is nothing more than a highway maintenance facility. If the gate wasn’t locked, I may have stopped in to have a word or 2 with them about grading the road.

At this junction, I fueled the bike with the extra 2 gallons I was carrying and then cached the container in the bush, with the intent on picking up upon my return (which I did). At this point I traveled about 70 miles. I had another 130 miles to go. From the Nahanni Range Road junction I was not to see another vehicle until I arrived at the only campground along the road about 70 miles in 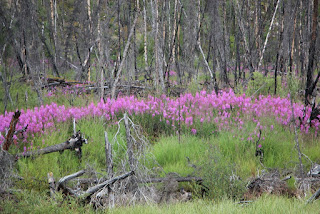 The initially 30 miles or so had obviously experienced a severe fire within the past 3 years. It was covered in Fireweed. While the road was in good shape, there wasn’t really anything interesting to see for the first 70 miles.

Upon arrival at the Nahanni Rd campground, I could see it was a victim of the fire and was burned out. There was, however, a couple in a camper staying there. I was to see these folks the next day, fishing along the Hyland River, approximately another 30 miles up the road. 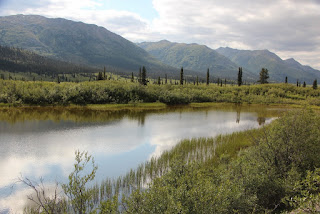 After crossing the Hyland river, the views got very interesting. The mountains rose up before me. I began to head north in a wide open valley. Lots of open space, beaver ponds and grand views as I traversed the edge of the Nahanni mountains. I was fortunate enough to see a pack of white wolves (six of them). They were beautiful. I attempted to get their picture, but I wasn’t quick enough to get my camera out of my tank bag. Which was too bad, because a couple of them posed momentarily in the road, staring back at me intently. A mile or so later, I saw a moose cross the road. 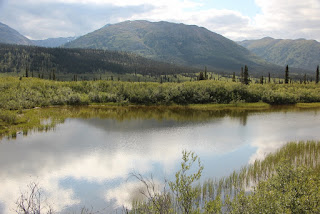 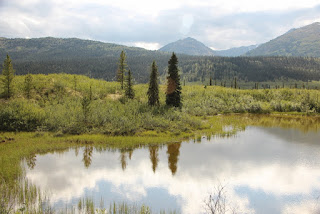 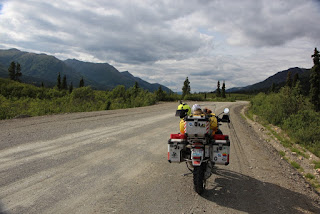 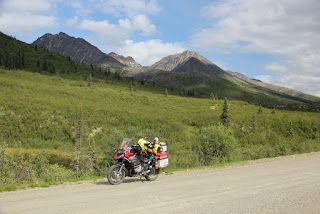 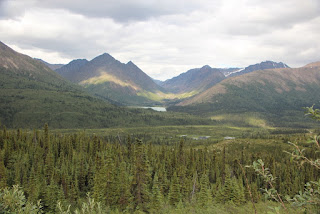 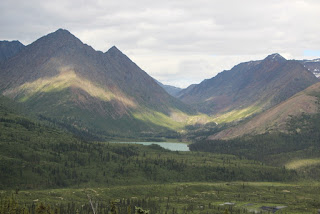 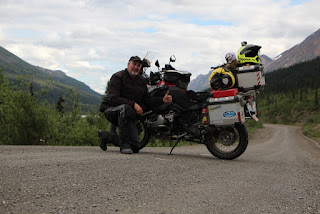 The road eventually turned east and I crossed into the North West Territories. Where I crossed isn’t clear as there is no signs. At this point I felt completely alone. I did not see another vehicle on the road for 130 miles. Additionally, I was told at the Watson Lake Visitors center that the mining operation has shut down due to market conditions and the cost of extraction. As I entered the mountains, the road became narrow and the mountains began to enclose on me in all directions. It was about 7:00 pm  in the evening now. I was looking for a place to camp. Not many options.

I approached the mining facilities and was able to enter, as the gate was open. However, there was warnings and no trespassing signs posted. I didn’t go in too far before turning around. I managed to find a pullout on the side of the road with a narrow path to the river on a gravel . I rode my bike through to the gravel bar on the river and set up camp. 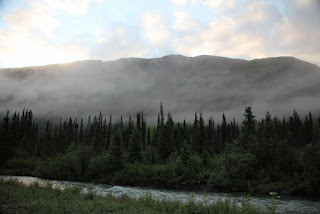 It was beautiful. However, clouds quickly formed and it began sprinkling just as I finished bathing in the river. I covered everything up and “bear proofed” my camp … taking my bear spray into the tent with me. Sometime during the night I awoke to a torrential down pour. After a couple of hours I took a peak outside my tent. The river had swelled to within 1 foot of my tent. It was at this point, I got extremely worried. My biggest worries were the road conditions and getting out the next day. The immediate worry about the rising river was also of concern. The plan was to wait out the rain. If the river came to the tent, I was going to pull up stakes and toss the tent into the bush and ride into the mine community. I saw a place where I could hang out under cover and out of the rain. Not ideal, but at least I would be dry. I managed to fall asleep and awoke about 5 in the morning to take my morning pee. It was still raining, but not as hard. Cold, yes, but the river level was holding steady. At 7:00 am, the rain stopped. I crawled out of the tent and saw heavy fog in the valley. There was hope. 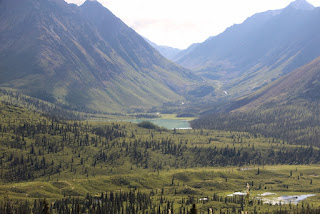 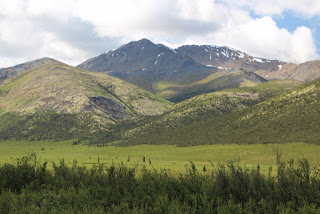 I went back to sleep and woke up around 10:00 am and the saw that the sun was trying to burn through the fog. Elated I got up and made breakfast. The weather improved dramatically. Around 1:00 it was warm and the river receded. I took a hike up the road to check the conditions. All good. A helicopter flew by overhead carrying an oil drum. I gave a wave and they tilted the copter to acknowledge. I dried out everything and made lunch. Around 3:00 I was packed and heading back to Watson Lake. Unbelievably, the road, although wet, was solid and firm. No mud. I was pleasantly surprised. 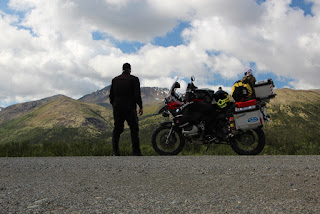 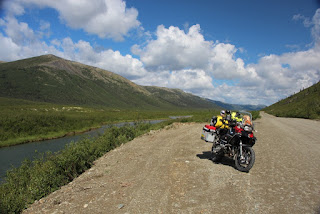 The afternoon ride back through the valley was amazing. At one point I saw bear tracks and lots and lots of bear scat on the road. It seemed that a bear was hiking the road for about 10 miles as I saw bear scat mile after mile. Or perhaps, there were several bears out there on the road. Despite this, I never saw a bear. 130 miles later, I found myself back at the Robert Campbell highway. From there it is a slog back to Watson Lake. It was late in the evening and I had to ride through the shitty road construction again. Fortunately, I was alone, so I bypassed the detours on my bike to avoid as much of the sandy shit as possible. I arrived late at Watson Lake and found a room at the Dragon’s Den Motel. I didn’t care much for this place. Unfortunately, the Air Force Lodge was full.

Tungsten – What is it?
Tungsten is one of the world’s hardest materials and has the highest melting point and tensile strength of all the metals. It is used in mining, petroleum, military, construction and metalworking industries.