Grizzlee Stories From the North: Beyond Dawson City

So I left Dawson City in the afternoon after checking out Gold Bottom, Solomon’s Dome and the Midnight Dome. All great places to ride to with history and scenery to keep it interesting.

I once again, took the ferry across the Yukon River at Dawson to tackle the Top of the World Highway. Weather started out pretty good and I was thinking that hey, maybe, just maybe, I can escape the rain for a day. And I did initially. However, Mother Nature wasn’t going to let me off cheap today. She decided that while I was riding the nice compacted dirt road of calcite, that it was time to fool with me. And so the skies opened up again for another spanking of rain. She let me have it. I had to eventually pull over to a pullout and wait it out as the road got greasy and worse yet, the high humidity wouldn’t allow for my helmet to be fog free.  I was essentially riding blindly through the greasy mess.
I waited it out for about ½ hour and the elusive sun appeared long enough for me to grab a snack.

Form there I was able to witness the 1st Nations folks harvesting a Caribou. From the distance, I saw a herd upon the ridge, when I got below them, I could see the natives had shot one and were loading it into their truck. 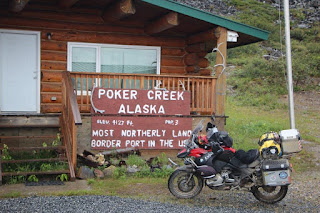 I made my way to the Yukon/Alaska Border crossing, known as Poker Creek and the rain gods pissed on me some more. I then followed the US side of the border for about 18 miles or so of new pavement. WOW, I thought, this wasn’t here last time. I was riding along at a decent clip when I had to brake abruptly. Another herd of Caribou had decided to blindly cross the road in front of me. They seemingly appeared out of nowhere. Form thee, I had a wet ride all the way to Chicken Alaska. I pulled in and got some of their free coffee and mingled with a couple of other riders. A father/son team that just got off the Dempster. They had an interesting riding up to Tuk. It seems they rode up to Inuvik in one day. Spent the night there and made a run out to Tuk and then came back to Dawson city in one day!! They stated that ti was so wet and miserable, that they just wanted off the road. This gave me good confirmation that I had made the right decision by waiting. 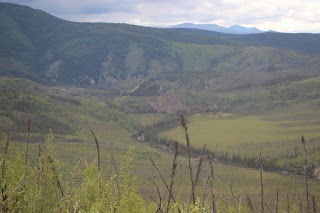 From Chicken I rode to Tok. While the road was paved, it was very rainy and lots of sunken grades. I almost got clobbered on more than one occasion by big semi trucks cutting the corners in the turns to avoid the sinking grade of the road. It was actually pretty dangerous. I approached each corner with the utmost caution. When I finally hopped on the Alcan Hwy to head for Tok (~12 miles or so I believe), I got dosed with a continuous cold down pour. My plan was to camp in the Eagle Claw campground, but I was shivering and soaked to the bone when I arrived at Fast Eddies in Tok. I checked on the availability of a room at Youngs Motel (owned by the same folks) and got the last one. I happily paid $100 to get out of the cold and take a warm shower. Afterwards I made my way to the restaurant and had the all-you-could eat salad bar and a beer. The father/son team pulled in on their KLRs and we had a nice visit.

The next day was still wet. I made my way toward Fairbanks in mixed weather. My goal for the day was to end up at the University of Alaksa Fairbanks and claim a dorm room. Along the way, in North Pole Alaska (yes, this is a real town up there outside of Fairbanks), I met up with another group of riders that had come off the Dempster. They made it as far as Inuvik … barely they stated and turned around the next day because the conditions were so awful. Their story included staying in a maintenance camp after experiencing many falls/crashes from fatigue. They stated that folks are not normally allowed to stay at the camps, buts the crew opened their garage and let them spend the night in it. The gov’t workers, brought them pizza and fired up the stove. They said it was downright cozy and a godsend for them. A pretty miserable experience for sure. 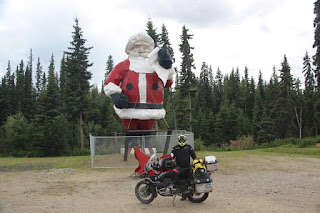 I arrived in Fairbanks still concerned about the weather. I was able to get a dorm room at the University  for $40 for the night. This is a bargain and I loved staying there. They have free internet and laundry included with your stay. The best part is, it is a mecca for other like minded riders of my ilk.  I met up with a guy from Texas, riding a GSA like me and we went to dinner at the Pump House Restaurant on the Chena River. We got a table outside and basked in the rare evening sunshine with a local brew and a steak. It was the best meal of the entire trip and well deserved.

Back at the Dorm, I checked the weather conditions on the Haul Road (AKA The Dalton Highway) going north toward Prudhoe Bay. The weather seemed OK. Nothing out the ordinary. But the word on the street was, that they have been experiencing very wet conditions up there as all summer.

So, the next day, I packed up my bike and headed out towards Prudhoe Bay on the Dalton Highway. 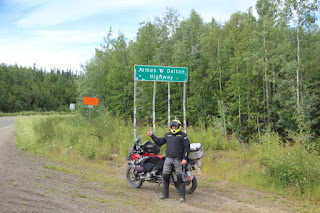