Grizzlee Stories From the North: Dismal Days Ahead

Grizzlee Stories From the North: Dismal Days Ahead

I left Whitehorse after spending 2 days with a friend in hopes of doing the Dempster Highway.
The weather was in flux and It seemed that the forecast changed every couple of hours. In my research of the ride reports, riders were having an extremely hard time on the Dempster as a whole. They had nearly record rainfall for June and thus reports of injuries, abandoned bikes and other harrowing tales of woe were rampant. And in talking with locals, it seems the road to Tuk was in bad shape form the severe wetness, some even stated that the road was rushed to get open for the season and as a result wasn’t quite ready for all the tourist.

The ride to Dawson was at times misty and for the most part under clouds with little to no sunshine. I stopped in Carmacks to meet the owners of the Coalmine Campground to get more skinny on the road conditions and weather. I got more of the same … complaints of how wet it has been and the road to Tuk isn’t what it should be.  I happened to have lunch with a road worker and his buddies who worked on the stretch from Inuvik to Tuk and they told me that I should with until next year. They complained heavily about the type of rock that was used on the road… it wasn’t good and that they will have to harvest shale form another site to repair the road properly.  They said in its current state the road was dangerous and that the Dempster had been shut down due to slides.

I took all this too heart and motored my way further north. I love this country. At Carmack I crossed the might Yukon River and shortly thereafter stopped to gaze at Five Finger Rapids. I know this river well, for I have paddled it three times previously and every time I see it I get emotional and am reminded of the great times I had paddling it with my family. The first time, I paddled it with my son when he was 11 years old. That was a grand adventure.

I continued my way north, passing through Pelly and eventually coming to Stuarts crossing, about 80 miles away from Dawson. It was here that I met up with a lone bicyclist who just came off of 14 days of riding up and down the Dempster Highway. I listened with great horror the tales he told of the accidents and the abandoned bikes left on the road. He stated that it was extremely wet and muddy at times. However he did say, there were some days of sunshine. The day before however, he told me the road had been closed due to a slide and that some motorcyclist was injured and had to be medevac’d out.

My hopes of riding to Tuk were dwindling at this point. And sure enough, as I arrived at the junction of the Dempster and Klondike highways, there was a sign stating that that Dempster was closed at mile marker XXX (I don’t recall the exact mile marker). Disappointed, I made my way into Dawson city setup camp at the campground across the Yukon river. That was actually fun. It was about 9:00 at night by now and I took the ferry across the river to get there. I found a nice secluded campsite and setup my tarp and my tent. All through the day and night I would get spritz of rain. It was very humid and sticky.

The next morning I took a walk to the see the steamship graveyard down river form the camp. It is a short walk along the beach. I am always amazed at the history that is parked here. It is too bad that some of these steamships were not preserved for historical reference. The steamers were abandoned in the 1950’s when the Klondike highway was finally built and connected Dawson to Whitehorse. The need for the old sailing vessels disappeared overnight. Many of them parked here and left to decay. 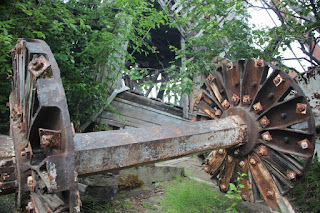 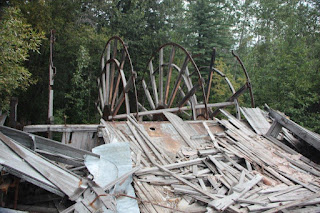 Afterwards, I made my way back over the river, via ferry, and stopped by the NWT visitor’s center. I asked about the road conditions of the Dempster Hwy and was told that the Dempster was temporarily closed due to mud slides. Furthermore, I was “strongly” asked not to try to ride the road until later in the summer or to come back next year, especially alone. They repeated most of what I already heard… It seems that had an unseasonable heavy rains and the road conditions are in decay as the maintenance crews are working round the clock to repair the road… more so than ever this year.

So, instead, I decided to ride the Midnight Dome and then do a circular ride out to Bonanza Creek and ride the Hunker Creek road to Gold Bottom and up towards Solomons Dome. It was a wonderful ride for the most part and I got some great footage of modern placer mining in action. It did rain on me and up towards the summit I could see north into the Dempster country and it wasn’t looking good at all. Rain, rain, rain and more F@#%ing rain as far as the eye could see. Damn it!!! 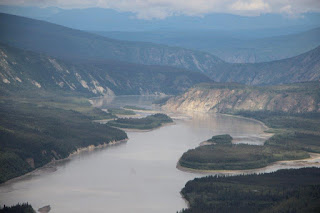 It was at this moment, I decided to head over to Alaska and ride towards Prudhoe Bay.
Posted by GrizzLee at 7:41 AM